No Glee for Queer teens

Posted on November 14, 2011 by newdaynewmood

Sorry I’ve been a tad slack. I’m apologizing to myself, my inner-guilty narcissist, Jesus (not the big One, the “false icon” on my subway who perpetually asks me for smokes even though he always has one hanging out of his mouth, unlit) and my few loyal followers who have actually been so sweet as to ask me for more posts. Unfortunately, I went to Montreal. You know how it is. That city, the political fervor, the fantastic people, the dancing, the baguettes! But I’m back. So here I go.

I was coming back from a hike and heading to buy Junior Mints when I came upon a rummage sale with piles of magazines littered across a table on Queen. There I stumbled across an older 2011 Entertainment Weekly issue where I was met with two shining, polished faces belonging to the t.v. show Glee‘s Kurt (Chris Colfer) and Blaine (Darren Criss) on the cover.

Included in the Entertainment Weekly article was the declaration that a “new class of young, gay characters” on T.V. were “changing hearts, minds and Hollywood.” I was confused, per usual. Given the particular moment we are living in here in the west, where queer teen suicide is being called a pandemic across Canada and the US, I wondered how on t.v. being gay was considered amazing, almost a Disney-dream, whereas there have been countless proclamations of the violence against, and alienation of young gays outside of the t.v. world.  Intrigued by this act of making a particular brand of gayness visible, I started researching.

At first glance, the list of  shows that now have gay teens as characters seems encouraging. Even though the stats surrounding how many t.v. shows have series regulars who identify as gay, lesbian, bisexual or trans are still pretty low (2.9%, down from 3.9% in 2010) considering how many characters there actually are on t.v., I guess as queers we’re supposed to be happy we are being included at all.

Some of the shows that have cropped up with homosexual youth characters are: 90210 (bisexual character Adrianna-Tate Duncan and Teddy, though Adrianna’s character’s sexuality is barely discussed, and Teddy’s sexuality has gotten him reduced to a recurring character role when he was originally cast as a regular); Glee‘s Kurt and Blaine, and lesbian Santana and her bisexual pal Brittany; Degrassi: The Next Generation‘s Adam Torres who is the only recurring trans, FTM character, also known as teen Nick; TrueBlood‘s bisexual Tara; Pretty Little Liars‘  Emily Fields and her ex-girlfriend Maya.

Of note is that overall the numbers of teen queer characters is dropping. Still, their visibility on these popular shows has been paramount to offering hope to alienated queer teens who are in desperate need of role models and accurate representations of their lives. Jamey Rodemeyer and Jamie Hubley who each died by suicide this year were both huge fans of Glee. 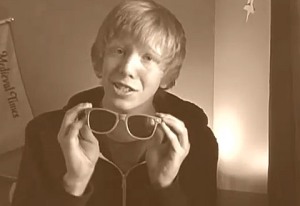 And queer audiences become very invested in and passionate about what they expect in these gay-teen representations, perhaps because of their sheer rarity. As Heather Hogan states, “if your favorite lesbian character stops resonating with you, you can’t just channel-flip until you find another one. Nothing is scarier or more enraging than feeling like your own reflection is being smudged or stripped away.”

I’m not unhappy with the fact there are finally a few queer teen characters on television. I’m afraid of the ways in which queerness is being represented and at times rewritten on these shows. Overwhelmingly, these t.v. portrayals of queerness share one thing in common: a happy toleration for queers by heterosexuals. But this tolerance is inflected with an expectation of sameness and a dequeered gayness where homosexuality (complete with the perfect hair, clean-cut Prada clothing, and soprano poetry voice) is represented as an identity that can only be celebrated when it is “not different” from heterosexuality at all.

Robert McRuer explores the idea of tolerance and its relation to heterosexuality arguing that tolerance has become the new fad word. He outlines that “the [accepted] subject must demonstrate [. . . ] a dutiful (and flexible) tolerance toward the minority groups constituted.” So, while in the past representations of queerness tended to “demonize” it, today there is a movement towards flexibility that stresses the beauty of “diversity” and of “working with” queer people and their issues. The aim of these t.v. shows, then, is to deliver us a hyper-tolerant, flexible heterosexual society and to deliver us a gayness that is thriving, that fits into the hetero-universe flawlessly and seamlessly, and that strives and succeeds without the pains of hetero-homophobia, ostracization, or the violent hate we see everyday in the non-Gleeful world at large.

These shows are showing us that queer teens are exactly like their incredibly tolerant straight friends, and that bullying, abandonment from parents, and judgment from teachers, are no longer issues. Further, these gay characters show us that for queer teens there is no messiness; there is no sex; there is no depression or fear. Instead, there are love songs, sporadic dance numbers, financial successes, and a lot of cuddling and hugging from heterosexual pals.

What’s wrong with this? What is at stake by portrayals like this? On the surface, maybe not too much. But if we actually take a moment to negotiate who is watching these shows, what the message within these depictions of queerness suggest, things get murkier.

Wendy Peters, a scholar I met at a recent conference, delivered a fantastic paper on the television series 90210 and the representations of gayness therein. Focusing her attention on closeted character Teddy (Trevor Donovan), and his homophobic attacks against openly gay character Ian (Kyle Riabko), Peters argues that what is becoming common place within story lines that feature gay characters is that the only homophobia that is ever present comes from closeted queer teens themselves.

She furthers that, overwhelmingly, the school settings, families, and peer groups surrounding gay characters are depicted as spaces and groups comfortable with homosexuality, supportive to all characters who are gay, and “shocked” to find out that there is homophobia at all. In other words, these shows present a post-homophobic world where it is only the not-yet-out, self-hating, gay character who is hurtful to homosexuals. And somehow within these shows it fast becomes the duty, then, of the heterosexual youth to teach the closeted homophobic youth how to accept their own sexuality.

Here’s another example. On Glee, Kurt is openly gay but his homophobic-hater, Dave Karofsky, is closeted. After a lot of homophobia ensues from Dave, Kurt finally figures out that Dave’s violent tendencies against him stem from the fact Dave himself is gay and is trying to cover it up.  It becomes Kurt’s job (as the happy, out, talented gay) and the rest of the heterosexual community in Glee, to help Dave feel accepted.

Great. But what does it imply when we find out that the mean, violent, homophobe is closeted Kurt?

Charlie Condou of Coronation Street fame explores this phenomena of portraying the closeted queer teen as homophobic. He states: “ironically, I suspect that the gay character that most closely reflects reality in Glee is not the out and proud Kurt, but the closeted jock bully, Karofsky, who is struggling in denial over his sexuality.” Suggesting that it is much more difficult to create characters on a television series that actually mimic everyday life, rather than a romantic ideal about gayness, Condou’s assertion that Dave, the bully, is a more accurate representation of queerness might be so. The trouble with this presumption though is that homophobia is fast-becoming understood in these shows, and by audiences, as a queer problem.

If closeted-gays are the only ones hateful enough to be homophobic bullies, than heterosexuals, and the social systems that enable their “normalcy” are completely exonerated of any responsibility for homophobia. This is a dangerous message to be encouraging.

Furthermore, Condou is happy that these T.V. shows are presenting us with well “integrated” gays who “are most often seen dealing with the same everyday life issues as the straight characters” calling shows like Glee “political, but in a non-confrontational way.” However, my fear is that the idea that sexuality should be quietly politicized rather than rabidly argued actually borders too closely on the practices of silencing and assimilation.

If this is T.V.’s message for their gay-teen revolution we’re in trouble

Rick Mercer too argues on The Current that he didn’t think it pertinent to talk about his own sexuality because his profession, as a comedian, was to talk politics. But isn’t sexuality always political?

These shows are perpetuating assimilationist rhetoric while at the same time applauding a Western audience for their open-mindedness and tolerance of homosexuality. And yet, the reality of the situation is that homophobia is a huge concern for young teens today and bullies come in all shapes and identities. These shows are also perpetuating a myth that being gay is celebrated when in actual fact, in many corridors, locker rooms, malls, parking lots, houses, homophobia is continuing to undo young teens.

Intriguingly, what these television shows also proliferate is a space where homosocial bonds (those “bromances” we see all over the television between male pals who are straight but nuanced in their masculine affections) are strengthened and made completely safe. As Wendy Peters argues, western heterosexual society gets the added bonus of not being held accountable for the everydayness of homophobia while at the same time benefiting as their bonds between each other get stronger. And kids like Jamie Hubley keep dying.