Newt Gingrich on the Sacred

In his article “Eight Ways to Divorce Proof You Marriage,” relationship coach and author of Treat Your Man Like a V.I.P: Topless Tactics You Were Never Taught Xxavier T outlines what he argues are necessary tips for any wife who is trying to save her heterosexual marriage from collapse.

T warns his female readers that their feminine “manipulation[s]” (such as “withholding sex,” “fake[ing] an orgasm,” or “compet[ing] with the people/things that [her husband] loves”) will ruin her marriage. What we can surmise from this is that A + B = C. If the marriage ends the reason is because the naggy wife wouldn’t let her deserved husband play pool with the boys at the strip club down the street while she sat at home with his cold, dead dinner.

Similarly, in her treatise Grading on a Curve: The Marriageability Factor, Tiffany Green offers three compelling steps that both women and men can participate in to secure a happy hetero-marriage. Green suggests that love interests should “write down twenty things that [they] strongly believe [in].” NOTE: These things can vary from the pair’s religious beliefs to the sorts of diarrhea medications they would strongly recommend one another in a pinch. Once the lists are made Green next advises that couples gently scroll through their top ten “pet peeves,” (such as the picking of one’s “teeth in public”) circling their most egregious annoyance. Lastly, and finally, Green instructs the couple to return to their two previous lists and “cross out” the areas that each are willing to “compromise” on–such as the important social issue of  whether or not they should engage in the “hiring of a maid.”

And who says romance is dead in North America.

Both of these authors write for the website marriagepartner.com, a page dedicated to helping lovers find one another and avoid the pitfalls of divorce, a plague that the site claims is overtaking North American marriage. What I noticed, however, is that while the site provides these emphatically helpful tips on how to avoid the demise of heterosexual marriages, the sources omit any trace of advice for same-sex partnerships.

When I looked for similar sites that would help me procure and secure my future gay marriage, I was left bumbling my way through Christian Fundamentalist and political pages that didn’t seem incredibly helpful to me. Mostly because of the hatred and the misspellings. 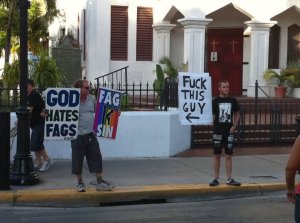 These hater websites seemed easily chucked into two categories. They either bombarded me with images—usually put to song—of flashy crosses, catchy homophobic-slang, and asinine tips on where I could go for a fancy gay-exorcism—to PRAY AWAY MY GAY—or they sent me to links that recommended I talk to my local politician about gay marriage debates. Have you met Stephen Harper? Oy.

Aside from some sites about the pros and cons of monogamy and more than a few pages on raunchy lesbian sex (NOTE: never type the terms ‘farmer’s daughter’ into your web-browser), my search for an informative and compelling website on how-to-do-gay-marriage-properly came up empty.

Sorry my fellow gays, it seems we’re going to have to figure out how to ruin our own marriages ourselves.

Still, if our current cultural interpretation of the traditional marriage tells us anything at all about how we North Americans understand heterosexual unions, then one thing is for sure: our conceptualization of traditional marriage is certainly intriguing. With marriage shows such as Who Wants to Marry a Millionaire, Jerry Seinfeld’s The Marriage Ref, The Bachelor and The Bachelorette, no one would dare question that traditional marriage is important in North America. Important and costly. Marriage has become such an expensive adventure that The New York Times recently estimated an average heterosexual union in 2010 cost at least $28,000, without rings. The same was true of Canadian weddings. Coupled with the shining examples of matrimonial bliss we have witnessed between such celebrities as Renee Zellweger and Kenney Chesney (whose marriage lasted a whopping 124 days), Eddie Murphy and Tracy Edmonds (which lasted two weeks), and Britney Spears and Jason Alexander (which lasted an entire eight hours) it has certainly been proven beyond any doubt that getting married in the West remains a seriously sacrosanct business.

And today I wake up to the news that Troy Polamalu, an NFL football player, just got fined $10,000 for calling his wife on the sidelines during one of his world-changing games, to ensure her that he was okay after he suffered a really dangerous tackle. He’d been concussed numerous times before and he knew his wife would worry that this one was serious. So he called her to say I love you.

It seems to me, and correct me here for sure if I’m wrong, that three seriously incongruent points are clear surrounding what we value about hetero-unity: 1) we say the bond between a man and woman must be safeguarded from selfish indulgence, and yet we are punishing a guy many dollars for doing a good thing by calling his wife (pretty close to free) to stop her from having an anxiety attack. 2) we say hetero-marriage is above-all else the most important bond to protect. So much so that a lot of people can’t give most gays the chance to enjoy it. And yet we are charging some dude $10, 000 (who for him is pocket-change) for an act of caring. 3) we say marriage is priceless, yet we’re dishing out 30,000$ minimum, without rings, to do it over and over again. $10,000 people, for a fine, or a ring, or a church rental, is ludicrous.

That money could seriously transform the lives of so so many other people globally. (Here’s a little chart just to show in what ways 10, 000$ might be better spent:

$100 — could send a Darfuri child to school with books, food, and shelter for one year. $1000 — can outfit an entire school of 2000 kids in Africa with sports equipment. $10,000– could treat ten HIV patients in Africa for a full year including their medical costs, all drug costs, and constant on site support and care.)

Given this evidence, I think it’s safe to say at this point that we can surmise the following about traditional marriage in the West: it is indicative of a special bond between a man and a woman that has been grown and nurtured over time (except when it hasn’t been); it is only recognizable by the eyes of God (except when it is being filmed in a an NBC studio by a camera man named Bob for a reality show); and that such unions are always already flawlessly forever (except when they fail in eight hours).

Makes perfect sense to me.

A crystal example: Newt Gingrich, one of the most stalwart anti-gay marriage supporters and a candidate for the next Presidential election has been married three times. Having left each wife (when they were seriously ill) for younger, (up)tighter women, he still claims to know how important it is to protect the sanctity of heterosexual marriage. I’m just wondering which marriage of his was the most sacred? Is there a scale for such things Newt? Call me.

While I do agree with the famous philosopher Chris Rock, who in a typical moment of astute philosophizing, states: “People always say we can’t have gay marriage ’cause marriage is a scared institution, it happens in the church, it’s sacred. No it’s not; marriage aint sacred. Not in America [. . . ] Shit, gay people have got a right to be as miserable as everybody else,” I am also prepared to close my left eye, accept the facts, and find other dreams to chase. Plus, I’ve already screwed myself out of a marriage to Michele Bachmann I suspect.

To be sure, it’s not our desire to marry that freaks out the freaky, it’s our desire to love each other that keeps them up at night. As Michael Foucault suggests:

“To imagine a sexual act that doesn’t conform to law or nature is not what disturbs people. But that individuals are beginning to love one another—there’s the problem [. . . ] Institutional codes can’t validate these relations with multiple intensities, variable colors, imperceptible movements and changing forms. These relations short-circuit [these institutions] and introduce love where there’s supposed to be only law, rule, or habit.”

So what’s a lonely gay to do?

What we have learned during the theatre of war we’ve been living through is that the best way to forgo ethics and lose sight of compassion is to become married to our own opinions surrounding what constitutes justice and freedom, right and wrong, evil and good, progress and stagnancy.

Gays have seen and lived the effects of such dualistic thinking for much too long already. It must also be remembered by queers everywhere that our ability to disturb, to be misfits, to choose the unchoose-able is what keeps us strong and ready to stand up in opposition to oppressions of all sorts. Our queerness, coupled with our refusal to stop loving one another because of it, is what is so scary to those who seek to police and condemn. If we marry, wonderful. If we do not, wonderful. We just can’t lose site of the potential spectacle of any of the choices we make, or take ourselves so seriously that we’d actually choose to spend $10,000 on a cake that looks uneatable anyway, than $10,000 on lunches for dying, impoverished children we don’t know but should care about.

So instead of trying to find marriage, I think I’ll step back and continue loving. If you wanna join me, I really like red wine and talking about things that are considered a major buzz-kill.