I’m entering month two of my 9 months of writing this thesis and I’m, well to be kind to myself, a tad behind. Why? Life swirls on around me and I’ve decided I’m not going to miss a chance to breathe it in. Why write about the potential politics of affect if that’s the case? I simply need loneliness to follow me around and we’ll map out some sort of longitude and latitude together until one of us gives out. High noon. Or late afternoon, depending upon what time I get to bed.

To attempt a recap, as much for me as for you, I’m trying to argue that loneliness is an everyday feeling that touches each of us. Neither unique, special, spectacular nor cataclysmic loneliness dips in and out in fits and starts and often settles in like a flea to fur, or, a nicer analogy, chocolate chips to cookie dough. No, I’m not calling you fat.

Because of its everydayness loneliness travels unnoticed much of the time. As common as the breeze coming in the window, or as a marshmallow melting in your mouth on a summer’s night loneliness has the quality of inevitable thereness. Not intent on blending into the background so much so that it is silent it pops up in the oddest of moments and seems to hide away when one might expect it to bring the wine to the party. It works to mobilize a stir within, a shake or rattle that is loud enough to wonder about and yet calm enough to stave off panic. In this way, no matter how it is conveyed to us by the media, loneliness is not a threatening disease that can overcome our social graces; loneliness is that gentle whisper in our ear, that soft kiss on the neck, that our social graces are currently shyte. 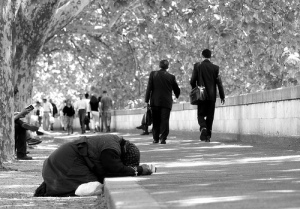 The fact that in the West we’ve had to actually create a Good Samaritan Law to encourage bystanders to ‘do’ something instead of turn a blind eye to people in need, and a separate “duty to rescue” law, is sad. And today, as I read about the baby girl in red stockings who was killed in China by a hit-and-run driver and left there to die by 18 passersby I want to throw up or throw down. But my loneliness is ever present, begging me to ask the larger questions that pull me away from singular blames and judgments and push me to question how this could happen? Has society lost its “moral glue” as one source said? Have we all become assholes? Has money, success, greed made us indifferent to simple compassion?

Quick to place the blame on an other, in this case China, news media outlets seem to forget our own tragic examples of utter, inhumane indecency. A friend of mine today drew a comparison to the 1964 murder of Kitty Genovese, a New York woman who was stabbed and left for dead while 34 neighbors heard and watched and did nothing. 10 minutes later the same attacker returned, stabbed her again, raped her, and stole the 49$ she had on her person. The case got so much media attention the phrase “the bystander effect” was born: “the tendency to not help [another] when other people are present.”

Examples of witnesses who do nothing when they see horrendous crimes taking place are not limited to the US and China. We in Canada are certainly willing bystanders to a litany of oppressions and the violence we continue to hear about, witness, and participate in concerning Aboriginal people for instance. How it is that it took B.C. police so long to track some 49 missing women (and growing in number) to Robert Pickton, a pig farmer known to police as violent, seems shocking. More shocking is that these women disappeared one by one from a tiny area of Vancouver’s Eastside and no one heard or saw anything. Disturbing as well is the reality that we Canadians are daily bystanders to the oppressions that continue to face the misfitted: sex-workers, the homeless, many queer identities, bullied children, impoverished single-parents, underappreciated immigrant new comers, differently abled-persons and so many others. The oppressive behaviors we wage might be dissimilar, but the bystander effect holds court.

I want to reiterate here that for me, my loneliness has nothing at all to do with feelings of exclusion. I do not feel like a pariah that has been kept from the social. At this point in time, as I look at the ways in which we are treating one another I could only wish for exclusion. Being anti-social is one thing, but being asocial is impossible no matter what the DSM tells us. There may be those who do not care for others, who are selfish, insensitive, so pathologically cruel that they only seem happy when hurting people they meet, or so completely out of touch with others’ feelings we call them sociopathic. I’ve met a few; they are awful and terrifying. But we are, all of us, social, even if we’d like to be otherwise.

As Judith Butler says in Giving an Account of Oneself: “there is no ‘I’ that can fully stand apart from the social conditions of its emergence, no ‘I’ that is not implicated in a set of conditioning moral norms, which, being norms, have a social character that exceeds a purely personal or idiosyncratic meaning.” Even if we want to be singular more than anything, even if we move to a treehouse and talk to no one for years, “the ‘I’ has no story of its own that is not also the story of a relation.”

We are born into the social; we’re hailed as social beings the second we are ripped from our mothers’ private bits and we’re inflected and implicated in the social every day for the rest of our lives regardless of the number of facebook friends won or lost, or days spent alone in the basement playing World of Warcraft. We exist in “the plural” as Hannah Arendt calls it, so that “even if we are by ourselves” we are still “in the company of others.” If we are human, we are social.

The only moment that we are actually alone, really, truly, alone is when we die. As Jacques Derrida (sounding relieved to find out he’s finally gonna get a social respite) so happily tells us in The Gift of Death: “death is very much that which nobody else can under go in my place” and so “by means of the passage to death the soul attains its own freedom.” When we start blurring the lines between human and something else, that elsewhere that seems to take us into darker quarters where the human does inhumane, monstrous things, this is the only possible time that the social becomes disconnected. But you’re no longer human then. You are nothingness.

What does this mean for the lonely gay? Well, as much as I’d love to claim that I am not a part of this social system we are living through, a social network that values money over people, Prada bags over food for children, that would walk by a dying baby on the street, that would turn away from statistics that say Aboriginal suicide for women in Canada is three times the national rate as though that were someone else’s problem, I am implicated in all of it by the very definition of being human.

So it’s not that the lonely are not social enough, it’s perhaps that our social is not something we are proud to admit we are a part of all of the time. I’m not saying this same social doesn’t attempt to exclude, bully, and bludgeon many of us. Oh, it does, but unfortunately for us we are still very much of it, stuck not being able to actually get away from it even if at times we feel only loosely assembled. Loneliness, then, becomes that necessary reminder that there is something that feels really wrong with the current ways in which we are relating to one another. And we are haunted by it.

Our sociality does not make us fabulous people, communities, nations, and worlds. Being a part of the social does not mean you are a part of an ethical mode of relation. I try to keep this in mind as I attempt to figure out what to do with this overwhelming sense of disgrace I keep feeling as I find out what we are doing to each other. 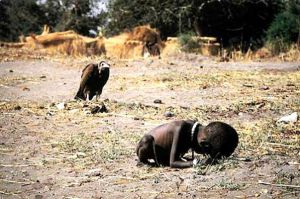 Still, I have to ask: what the hell is wrong with us all? Can we simply attach our lack of ethics to neoliberalism, capitalism, a need for more money and less feeling? Are we that certain we can do nothing that we literally do nothing? Or is it more? Does the fact that we live within the confides of totalizing systems mean that we have no room to move, change, shake things “slantwise” as Sara Ahmed would say? That we can’t be the thorn in the side of our social, constantly demanding more compassion and less indifference from ourselves, others?

Kathleen Stewart, author of Ordinary Affects says: “The terms neoliberalism, advanced capitalism, and globalization that index this emergent present, and the five or seven or ten characteristics used to summarize and define it in shorthand, do not in themselves begin to describe the situation we find ourselves in.”  And what is this situation?

A fucking lonely one, that’s for sure.

Somehow we need to find an optimism, even if it is only a “cruel” one as Lauren Berlant says, one that is not kind to our indifference and one that certainly holds us accountable for the cultural conducts we have fostered together.

4 Responses to The Bystander Effect